In recent decades, the injuries have increased along with the speed.

"They didn't go so fast in the old days," Iris maintains, recalling a couple of champions from the 1940s and 1950s who never fell down.

"It was much nicer to watch because there was more of an art to it. They just throw themselves like lemmings now, don't they." 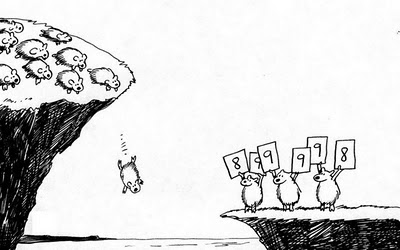 Morbid observers reckon that a serious mishap is only a matter of time. After all, on Cooper's Hill, a "breakneck pace" could mean just that.

The committee behind the Darwin Awards, which honour "those who improved our gene pool by removing themselves from it in really stupid ways", has already granted cheese rolling an honourable mention.

"We fondly anticipate a cheese-chasing Darwin Award nominee in the near future," the committee said.

To prevent that from happening, the cheese roll has the cave rescuers and the St. John Ambulance on hand.

In any given year, they can expect at least a dozen casualties and sometimes more than twice that number, with injuries ranging from grazed knees to suspected spinal trauma.

Then there are the photogenic wounds like head cuts, which bleed a lot and make the hill look like a battle scene, yielding headlines such as CARNAGE ON COOPER'S HILL.

The casualties tend to increase during dry years, when the sun bakes the slope rock hard.

In 1978, a runner was knocked unconscious for an hour, and a winner sprained his ankle and lost a front tooth: "it snapped off clean," the newspaper reported, alongside of him posing with a gap-toothed grin, the very picture of a local yokel.

To date, though, the worst wounds have been fractures.

"You get broken legs, broken arms, broken ribs, broken collarbones—collarbones are fairly common," the emcees says matter-of-factly, "but a lot of injuries look worse than what they are."

Like what you've read?
You can buy True Brits here.
Posted by Unknown at 17:51