Part 4: You Could Break Your Neck

But Iris Peasley's view may be closer to the truth.

"We're a bit chicken, I think," she chuckles. "We know the hill, and we know the sort of dangers and whatnot."

As a girl, she had wanted to chase a cheese, but her father warned her she'd break her neck.

By the time she was old enough to make up her own mind, she decided not to tempt fate.

Like the others on the hill, she leaves cheese chasing to youngsters from surrounding villages who have something to prove.

Every year, Jason Kotwica and his friends trudge up from Brockworth to run in the race. "If you live locally, this is like the main event in the whole year, innit, really. We love it, because it is like, our Christmas day."

Despite his Polish surname—his grandfather came over during the War—the 22-year-old is Brockworth born and bred.

A fence builder by trade, he sports a shaven head, a goatee and gold hoops in both ears.

Like his fellow buccaneers, he's been chasing cheeses since he was in his mid-teens. He reckons it makes so-called extreme sports look tame.

"Oh, I've done bungee jumping," he says dismissively. "That's not anything compared to cheese rolling. Because when you do bungee jumping, you know it's all organised and it's all safe. But when you run this, you could break your neck." 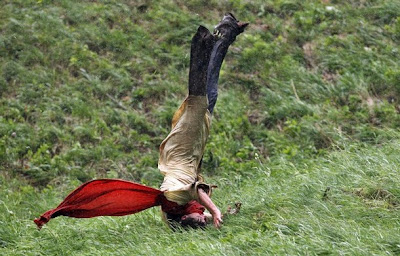 A few years back, a daredevil came all the way from Australia—or was it New Zealand?—to add cheese chasing to his list of accomplishments.

"And he came here, and everybody was like, 'Ooh, there's that mad guy who does everything around the world!' And he had elbow pads on, kneepads, helmet—everything." But it still wasn't enough. "He looked down there and said, 'No, I ain't doin' it.'"

Like what you've read?
You can buy True Brits here.
Posted by Unknown at 16:13